The lecture performance, based on the wave-particle duality and the double-slit experiment, deals with the narrow and at the same time fragile concept of identity. My body became the screen for the interference pattern of the double-slit experiment, the receiver of the determination when probability must become certainty.
“I am emitted through excitement and stimulation. After I leave, the excite- ment drops. I am energy at maximum speed. I will never give away my posi- tion and my momentum at the same time. I am coherent with my siblings. We are all of the same color. After being born we are sent towards a parting of the ways offering two options. We are expected to make a decision. If nobody is looking, we will avoid the decision and take both paths simultaneously. After passing the fork I will interfere with myself and change my traveling direction accordingly. My siblings will do the same. Our new traveling directions are statistically related although we will all choose our paths individually. Howev- er, if the fork is being watched and we have to reveal which path we take, we can only pass through one. Our probability waves collapse and the choice is reduced to following one direction or the other. Yet, as soon as we are not un- der surveillance anymore we free ourselves from the imposed identities and regain our uncertain nature. I only spring into existence when I am being ob- served. I could be anywhere. Yet, certain places are more likely than others.”

The work was presented as Dutch Art Institute Kitchen during the first year of my MA. 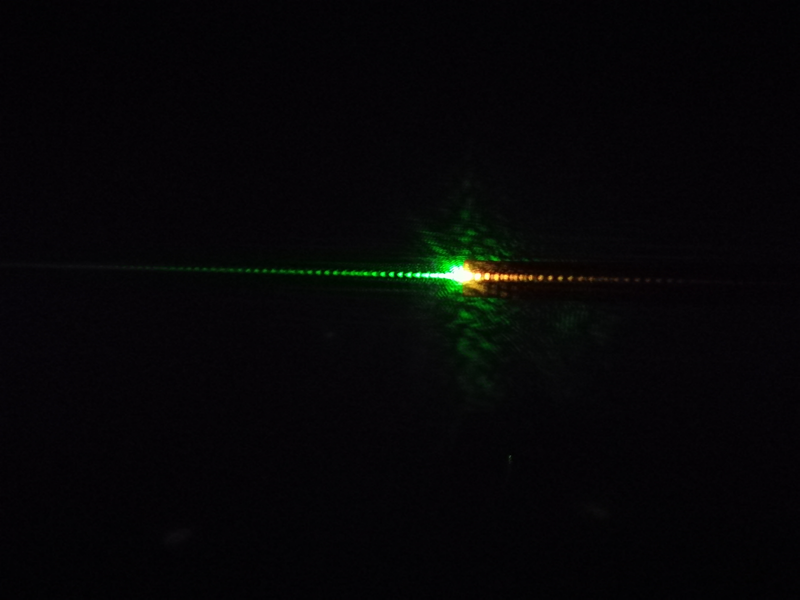 A family story about death and the attempt to immortalize life in diamonds.
One night Richard shows up at his sister Linda’s house in their parents’ car. The parents have prepared the car for a trip and taken their own lives in the back seat. The siblings search the car for an explanation until they find a farewell note. The night outside Linda’s house is interspersed with moments from the parents’ last hours, which above all shed light on the family situation.
With Verena Buss, Tobias Hübsch, Jürgen Lingmann, Christiane Nothofer
Director & Screenplay: Jasmin Schädler
Editor: Janina Kaltenböck
DOP: Max Christmann
Stage & Costume Design: Mariam Haas
Producers: Edgar Derzian & Tobias Hollmann 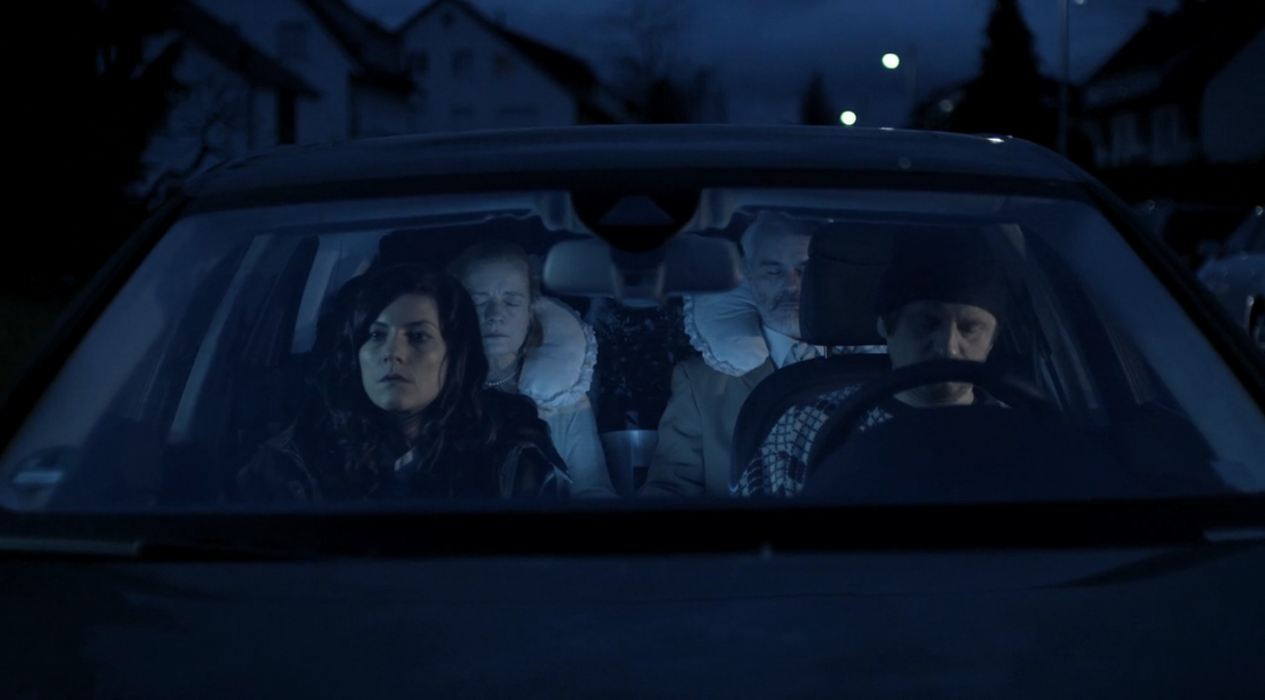 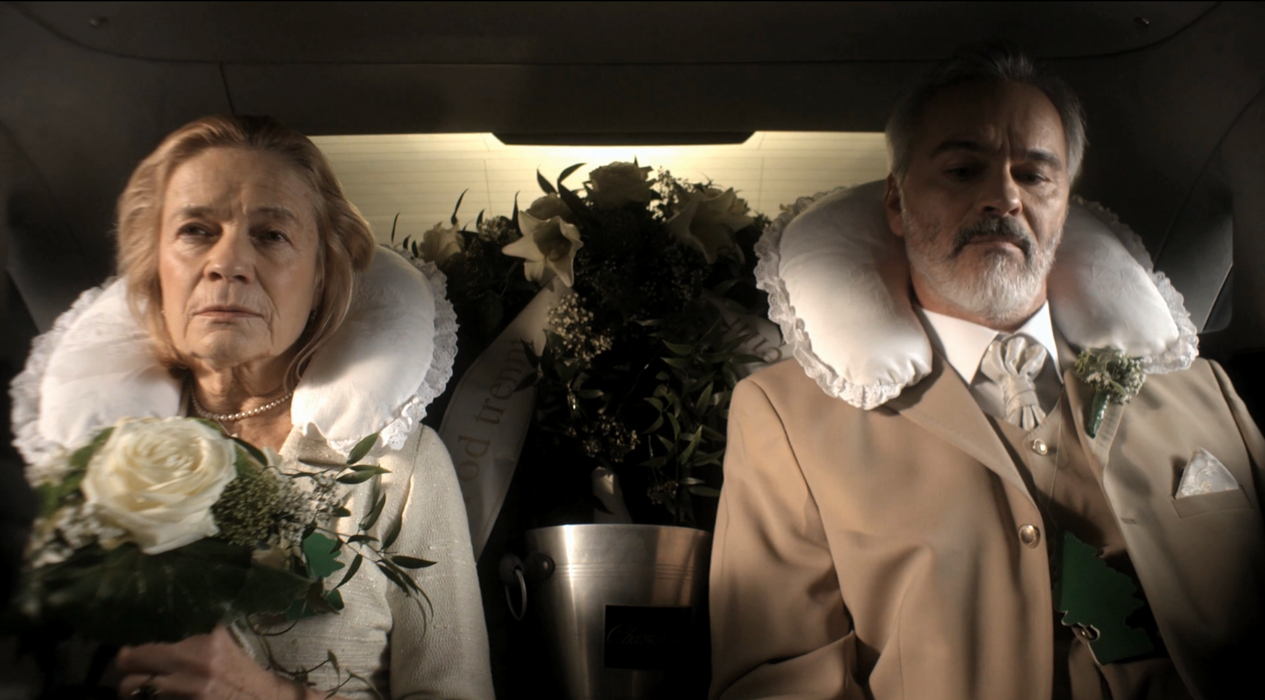 I say one must be a visionary, must make oneself visionary. The poet makes himself see by a long, immeasurable and planned debauchery of all senses, of all forms of love, of agony, of madness; he searches specifically, he exhausts all poisons in order to preserve only their quintessence. Unspeakable ordeal, for which he needs all faith, all superhuman strength, in which he becomes the great sufferer among all, the great criminal, the great condemned, - and the most knowledgeable! - For he arrives in the unknown! (Arthur Rimbaud, lettres du voyant to Raul Demeny, 1871)

Normality has returned. The federal election has been decided, university and school terms have resumed and the lawn has been mowed. The problems are reduced to the choice of the water brand and the decision about what to eat for dinner. If there were not the red cow on the green pasture. If only the sky would not darken, if only the others would not be there. dancing the apocalypse explores the lyricism of conspiracy and makes it impact the body. dancing the apocalypse makes you see.

The performance dancing the apocalypse was created as part of a Gastarbeiten residency at zeitraumexit in Mannheim.

In cooperation with Schauspiel Stuttgart and zeitraumexit. 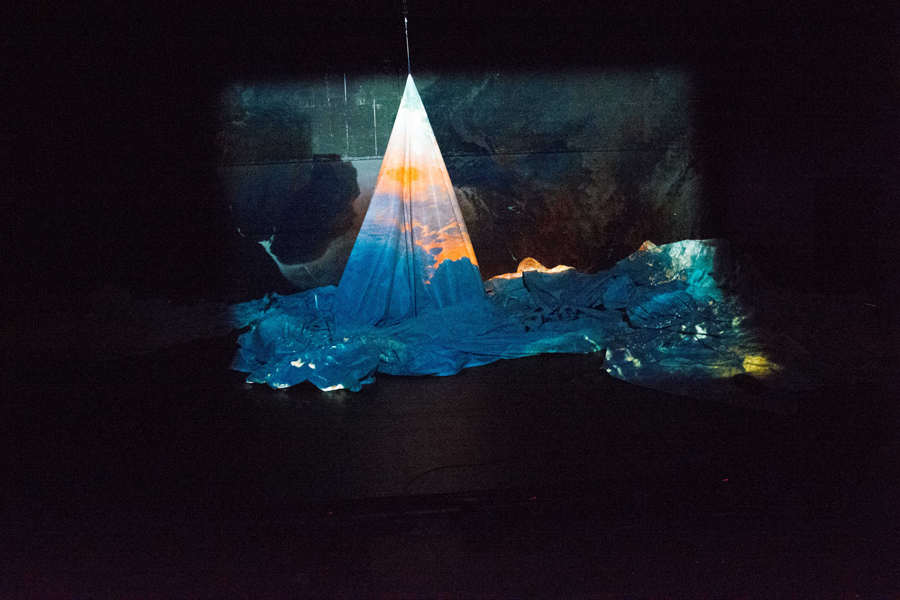 „But she shall be blessed by begetting children“ 1. Timoteus 2.15

With this Bible verse, Luther argues against celibacy and thus against purely spiritual motherhood as practiced in convents. Until the Reformation, virginity and being unmarried took precedence over marriage and procreation. Spiritual motherhood was the highest Christian virtue for both women and men: it was perfect caritas. The Reformation devalued spiritual motherhood and valorized carnal motherhood.
The focus of this investigation is Schiller’s Wallenstein Trilogy. In this work about the Thirty Years’ War, the uncertainty of the image of motherhood due to the Reformation is represented by the three female characters protagonists, Duchess Elizabeth, her daughter Thekla, and the aunt Countess Terzky. In the performative audio play Spirit || Mother || Flesh, Schiller’s Wallenstein text meets texts by Luther, Augustine as well as the history of the convent and the Reformation.
The convent garden is filled with figurative associations that expand and alienate the theme of motherhood, while the audience is invited to stroll through the cloister of Maria Stern Convent throughout the performance. 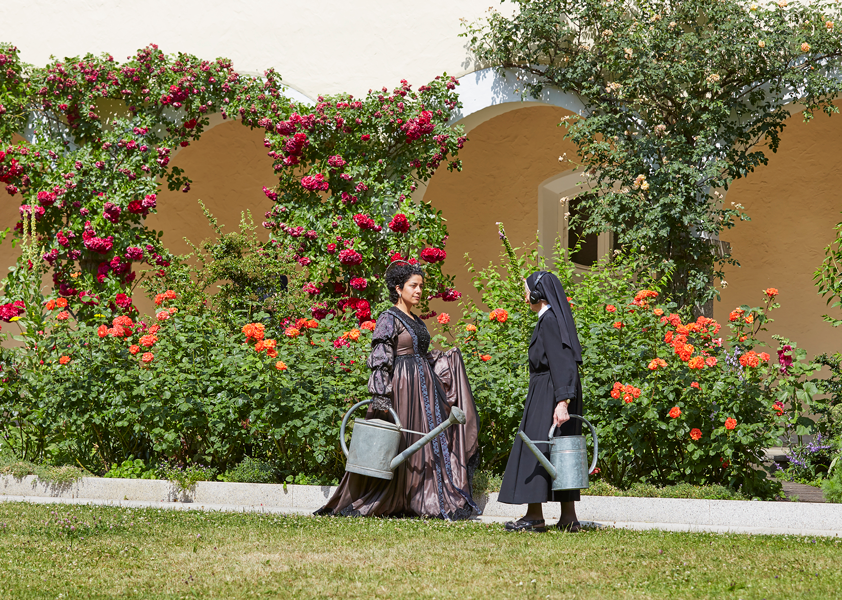 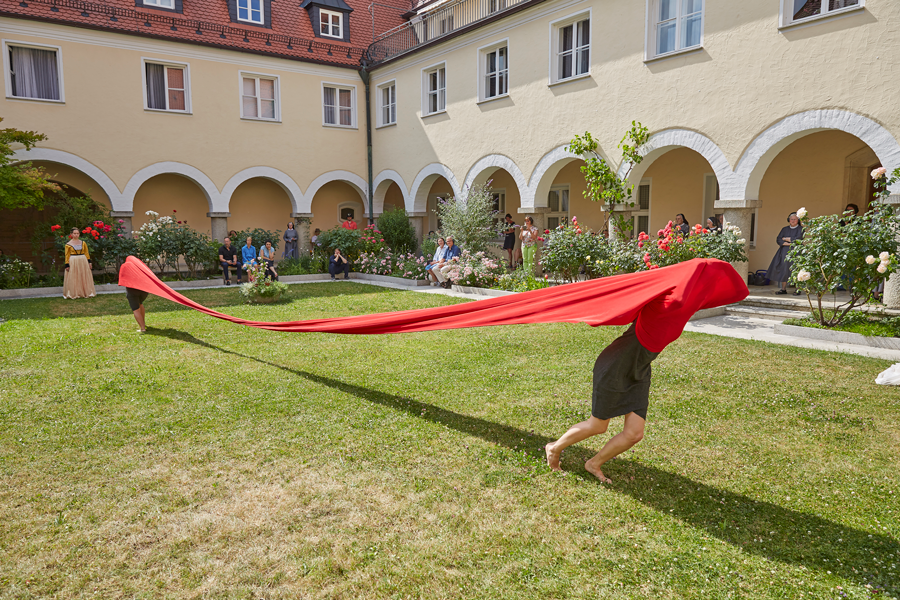 The performative installation investigates different dimensions of motherhood and was developed together with Johana Gómez during my fellowship at Akademie Schloss Solitude in cooperation with Akademie für Darstellende Kunst Baden-Württemberg.
The spectators are invited to move through the rooms at their own pace. The first room they encounter is the parachute room where a woman fights with the societal ties of motherhood while reciting a text by Angélica Liddell and birth related bible quotes. On the next floor the spectators enter a big motherhood laboratory where milk is constantly being (over-)cooked, a researcher is writing and reading about motherhood and a screen is displaying quotes from a conference for gynecology and obstetrics. From there three more rooms open up. The Skiagraphia room which turns the appearance of every person entering into sound by reacting to the moving shadow - a vague and reversed analogy to ultrasound scans. In another room my mother invites the visitors to move through a woolen sculpture inspired by the mathematical concept of the Klein bottle. In the third room the birth sound of Johana Gómez’s first child is playing while the projection shows how the staircase leading to her mother’s flat in Bogotá is being cleaned. At the opposite side of this room our mothers are shown as Mother Mary. Each portrait is equipped with headphones playing recordings of nick names Joahana Gómez and I call our mothers.
Accompnying the development of the projects a blog was published: Schloss Post Gestures of Motherhood
Gestures of Motherhood was also shown in September 2017 during the FF*GZ Stuttgart summer fair.
In October 2018, Gestures of Motherhood was invited to be part of Stadt der Frauen Festivals in Esslingen. 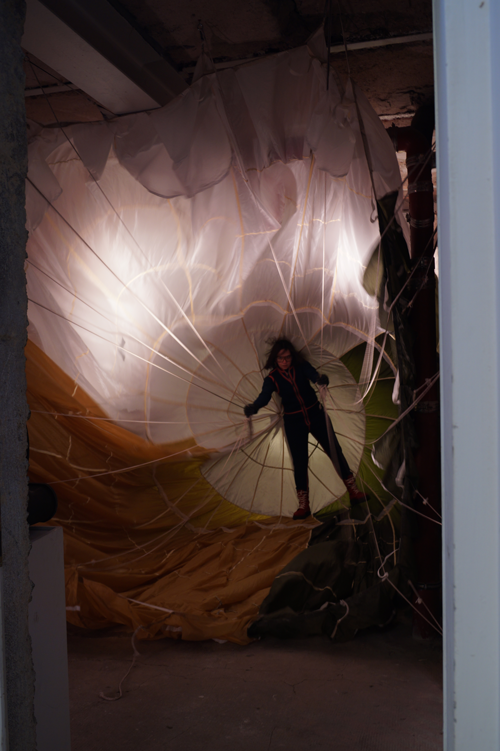 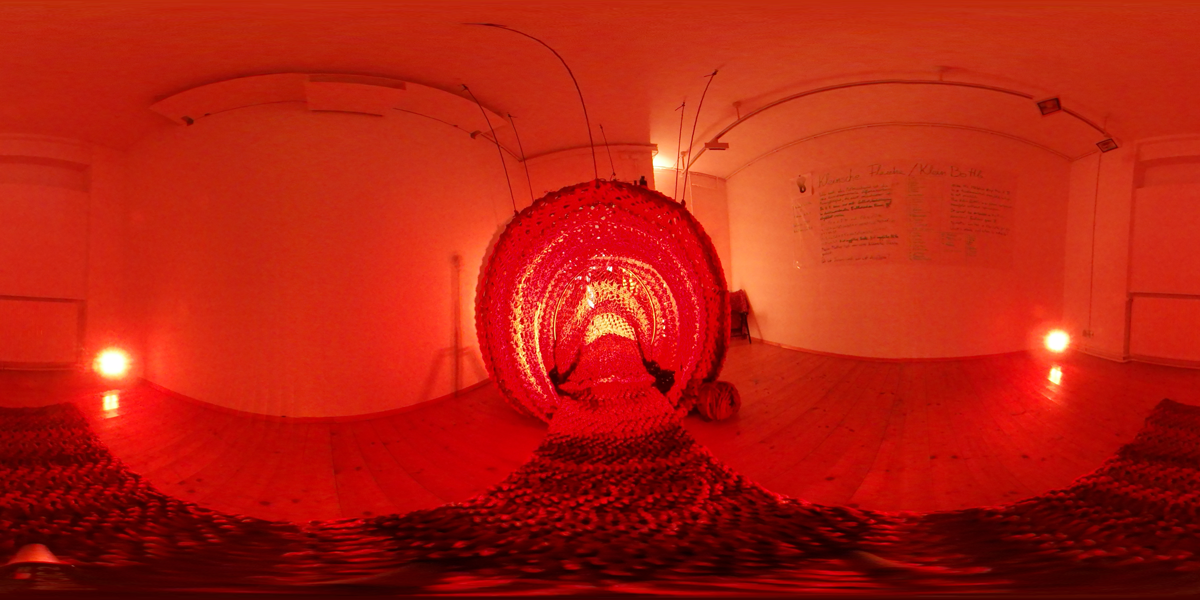 Not yet and yet not anymore, the title of the installation, is a quote from Brecht’s play Downfall of the egoist Johann Fatzer. The installation, commissioned by Schauspiel Stuttgart, is dealing with the conflict between individuality and wealth. In addition to Brecht’s play, Oscar Wilde’s essay The Soul of Man under Socialism was an important inspiration.
The installation consists of four parts. There is the Private Property Scale, an Arduino driven digital scale which asks the user to weigh their wallet but instead of weight, it outputs quotes from the two texts in relation to the weight. Property Devaluation Machine turns money into something almost worthless - a chewing gum which loses its flavor after a few seconds. Relict of Money Burning is a retired gambling machine which after an attempt of spontaneous combustion now allows one to look at its guts. The Staircase of the Rose reacts to people walking on it with good advice from Oscar Wilde: A red rose is not selfish because it wants to be a red rose. It would be horribly selfish if it wanted all the other flowers in the garden to be both red and roses.
In cooperation with Nordlabor, Schauspiel Stuttgart. 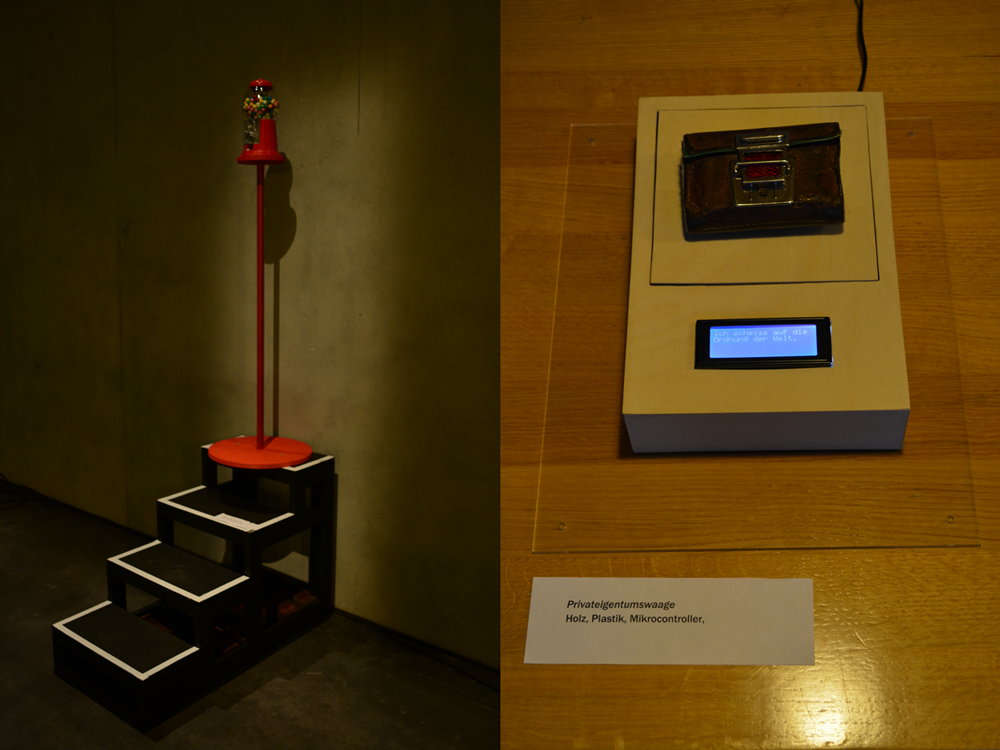 The project The (un-)importance of being I is based on an autobiographic experiment from 2014. Johana Gómez lived my life for three weeks.
The work evolves around the question “Am I replaceable?” and investigates the relationship between the external and personal influence on a biography. Johana took over every part of my life that can be handed over: name, family, friends, studying, email accounts, mobile phone, clothing, ID, money. Before I left she also shadowed me to understand my daily routines and habits. . During the experiment I was in Russia without identity, cut off from my life in Germany. We chose a uniform all in black I had to wear during this time. For myself the experiment lasted for two months since I started upon my arrival in Saint Petersburg and the beginning of the semester there.
The installation is based on our diary entries and experiences from this time. There is a sound installation with excerpts from our diaries spoken by a computer voice and audible through speakers filled with water. A wax sculpture made from plaster casts of my body continuously melts and postcards showing the signature of “Jasmin Schädler” with two different pictures cover the wall. The process of the melting sculpture from the first two showings are displayed on a screen. 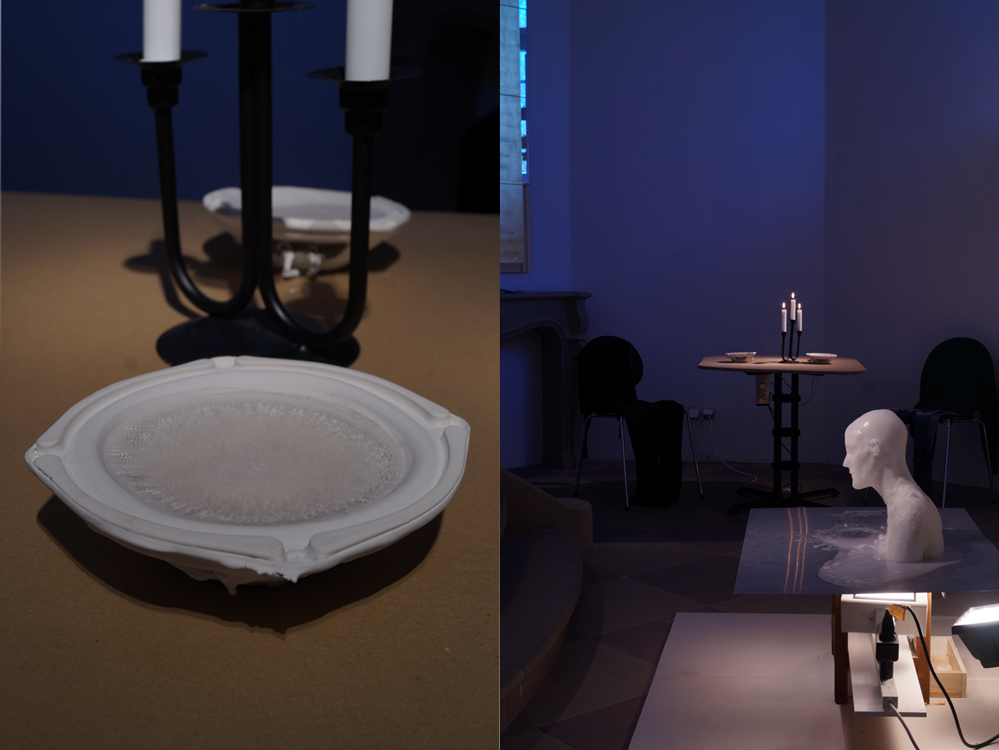