Banana Island is a choreographic and performative investigation of the banana. As one of the most important and popular foods in the world, protagonist of colonial and neo-colonial crimes and racist and sexist attributions, and at the same time film star, comedian, art and political weapon, the banana is the bracket and center of the performance. As we slowly begin to peel, we expose the tension between pop culture and tyranny. We interrogate the glamorous appearance of the banana and contextualize the opposites united in it.
The performance was acompanied by a week long programm including the Patacón installation by LaFuchsiaKollektive e.V. as well as discussions, films, workshops and walks.
The full programm can be found here: Banana Island Prolog

Funded by the City of Stuttgart, the Senate for Culture of the City of Bremen and Freischwimmen Netzwerk. 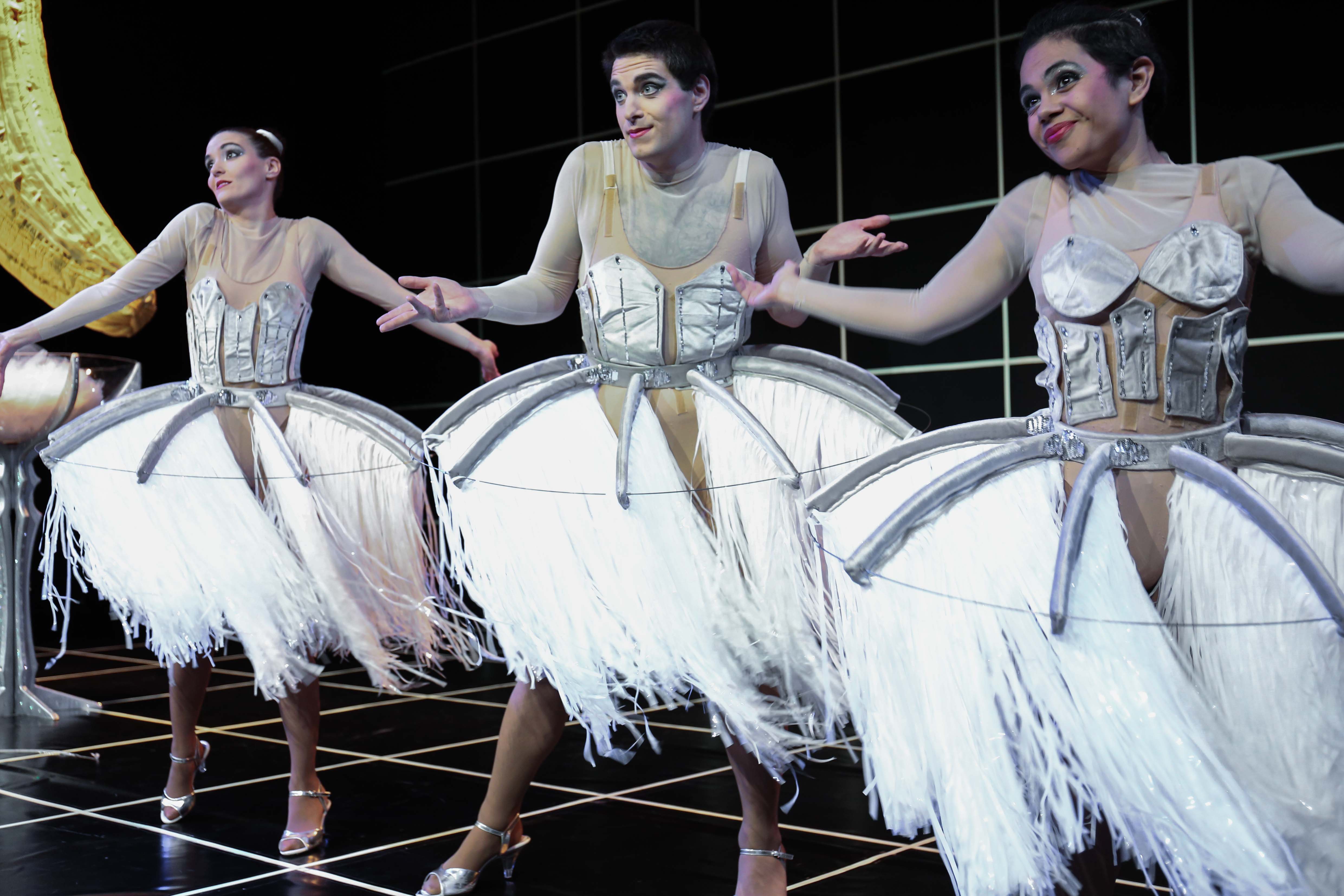 forever apocalyptic explores the desire for world conspiracies. The apocalyptic dancers have dedicated themselves to the task of exploring end-time scenarios and apocalypse fantasies with the means of the performing arts. They embark with their bodies on an aesthetic journey to the end of the world and place their limbs at the disposal of conspiratorial convulsions. The performance was created among others at zeitraumexit and premiered in Stuttgart in 2018. Now the apocalypse is finally coming to Mannheim and the first thing it will do is sweep away a parking garage. In its place, the new city library will soon be built - books beat cars! And the apocalyptic dancers read the Revelation to us.

Funded by the Association of Independent Dance and Theatre Creators in Baden-Württemberg through means of the State Ministry of Baden-Wuerttemberg for Sciences, Research and Arts. 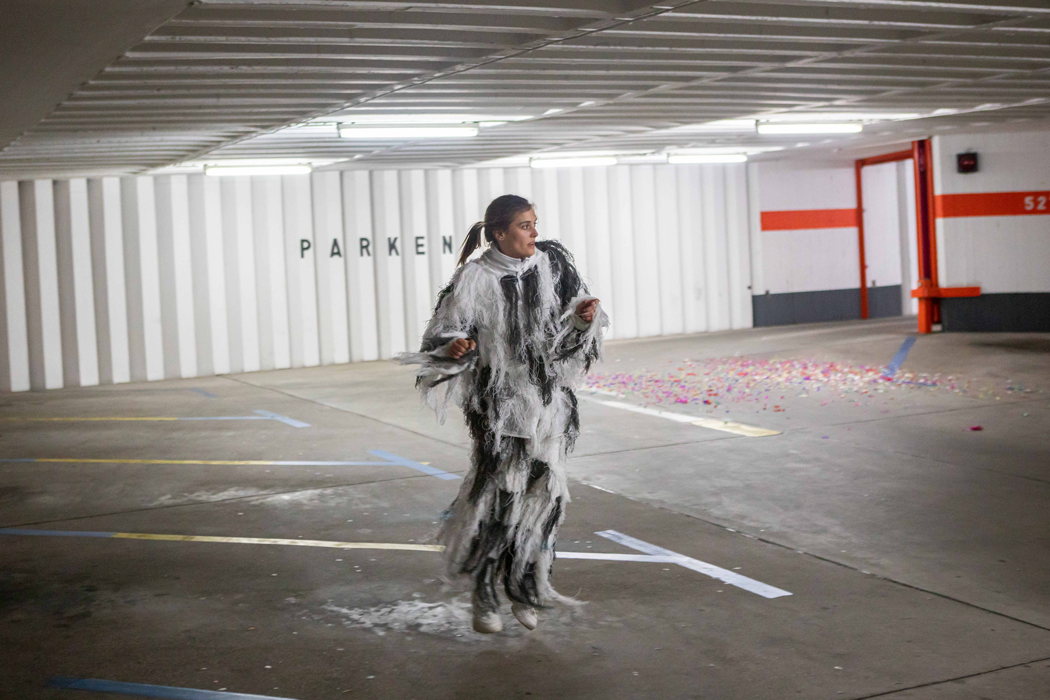 Banquet X’s COOP summit project builds on the shared roots of the banquet, the museum and the theme park. The Orto Botanico dell’Università di Cagliari (Botanical Gardens) is envisaged as a step into a near future ecopark. In addition to developing the audience guidance system, I choreographed the walking score Locust Walk, based on the swarm formation of locusts and triggered by the then prevailing locust plague in Sardinia. I also developed the sound installation There are two Worlds in the Room, inspired by a conversation with a scenario planner who works for Shell and tries to be an environmental activist at the same time. The sound installation could be listened from different benches in the botanical gardens, rustling from the bushes.

The project was part of the Dutch Art Institute COOP Summits 2019. 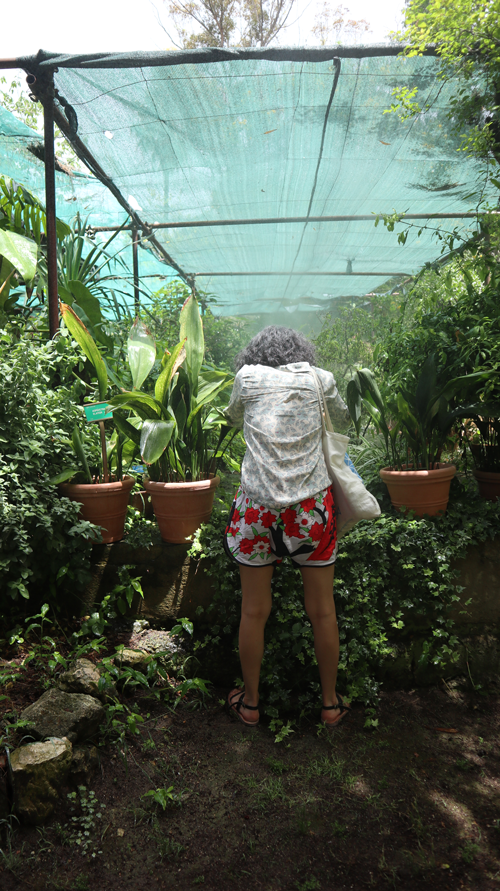 Childhood is still a contested area of interpretation. Children are instrumentalized for racial politics, educational projects are considered a status symbol for state governments, and even Ai Weiwei’s most controversial artwork, which refers to the media use of an image, instrumentalizes a washed-up, dead child. Children’s needs are put into their mouths in all these cases. What never happens in the process is the conversation with children. They are considered worthy of protection, but also, in the tradition of Kant, immature and capable of being educated to become better human beings.

Our project following mo turns this relationship around. Consciously naive, we leave the guidance of a city tour to Mo, a child from Stuttgart we met during a costume workshop. He shows us his Stuttgart and thereby challenges the relationship we have to urban space. Which needs, which perspectives arise from this? And which assumptions about the childlike view have we cultivated and adopted without questioning them? 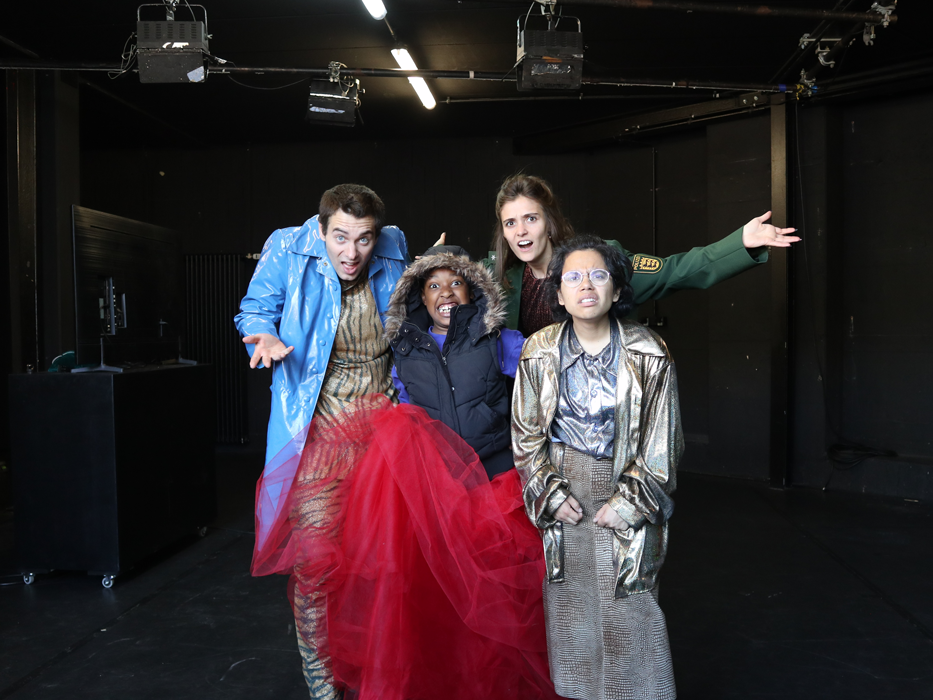 We mirror, externalise, divide, lose ourselves. The leftovers are not considered human anymore. We call them data and feed them into frameworks we call machines or algorithms. But we cannot forget these remnants all together. Remorsefully we start to anthropomorphize their new shells. Suddenly we live among aliens we created but actually we are only looking at amputated parts of ourselves. Are you looking at me? Mark is possessed by Algorithma. They look through his eyes at everyone else. The stars watch from above, streaming ethereal power, acting upon their destiny.

The lecture performance The Possessed Gaze is a meeting between the CEO programmer Mark (Zuckerberg), the algorithm Algorithma, the influencer (streaming ethical power, acting upon character and destiny) and the silent sub-user. The work deals with the relationship between humans and algorithms and questions the agency of the different actors. The circumstance of black-boxing (the ignorance of certain procedures in algorithmic processes) plays a central role. Part of the performance is a guest appearance by soprano Angela Postweiler, who improvises around the piece Spiritus Sanctus Vivificans by Hildegard von Bingen. Curator Antonia Majaca has highlighted the work as an important and groundbreaking step in the artistic interrogation of algorithmic black boxing.

With guest appearances by the singer Angela Postweiler and the performer Joannie Baumgärtner. 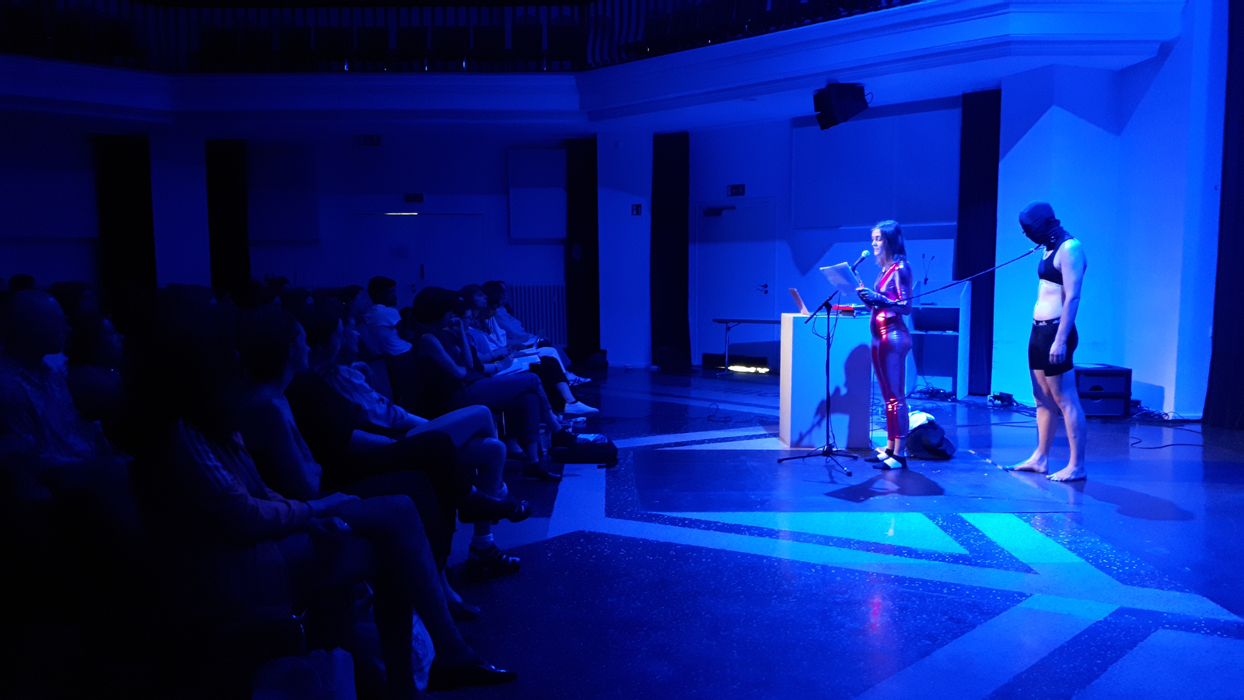 ‘wissen’ (knowledge) is the vowel gradation of the past tense ie. *uoid- ‘having seen’ and therefore ‘wissen’

On Saturday, May 04, 2019, a group of people gathered for four hours around a table in the lobby of Stuttgart Central Station. They ate, drank and held discussions with each other. Some had traveled especially for the symposium, others came along quite by chance. Seven of them gave insights into their professional and personal knowledge. Wissen, the German word for knowledge is etymologically the perfect of seeing. Once we have seen something, we know about it. But who can see what? Knowledge is closely related to truth in everyday usage. Wahrheit, the German word for truth has evolved etymologically from words for certainty and assurance. We accept knowledge when we believe it to be true. We consider something to be true if it provides us with certainty and confirms our existence. Certainty comes from legitimacy, from the subjective credibility of information. This credibility is mostly bound to institutions and their representatives, sometimes also to individuals. Truth therefore does not necessarily have anything to do with whether something can be objectively proven by facts.
Following the symposium, an installation was on display at the same location for two weeks, visually presenting the collected material. 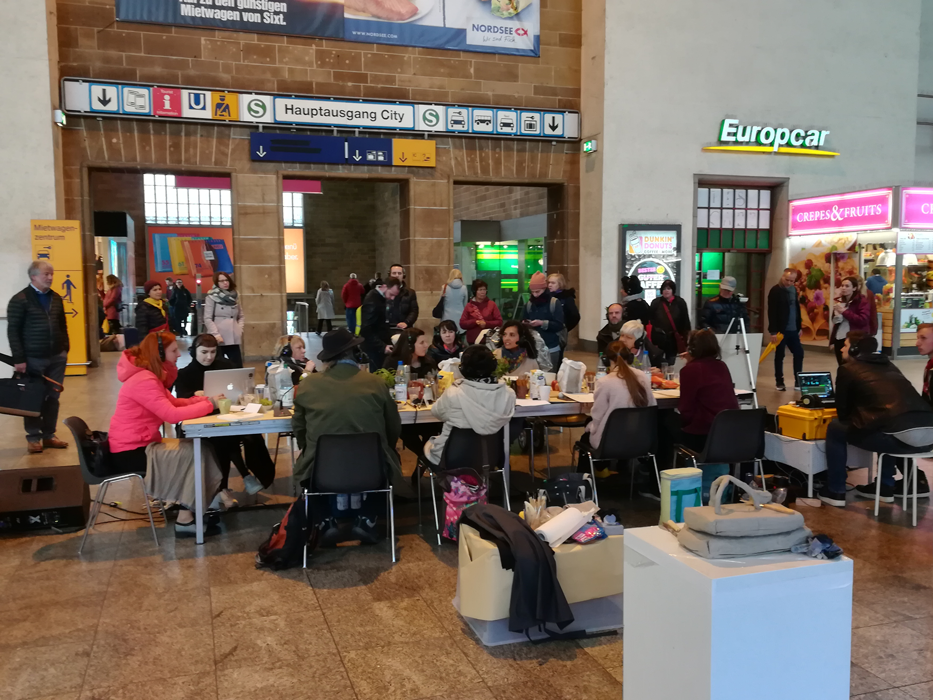 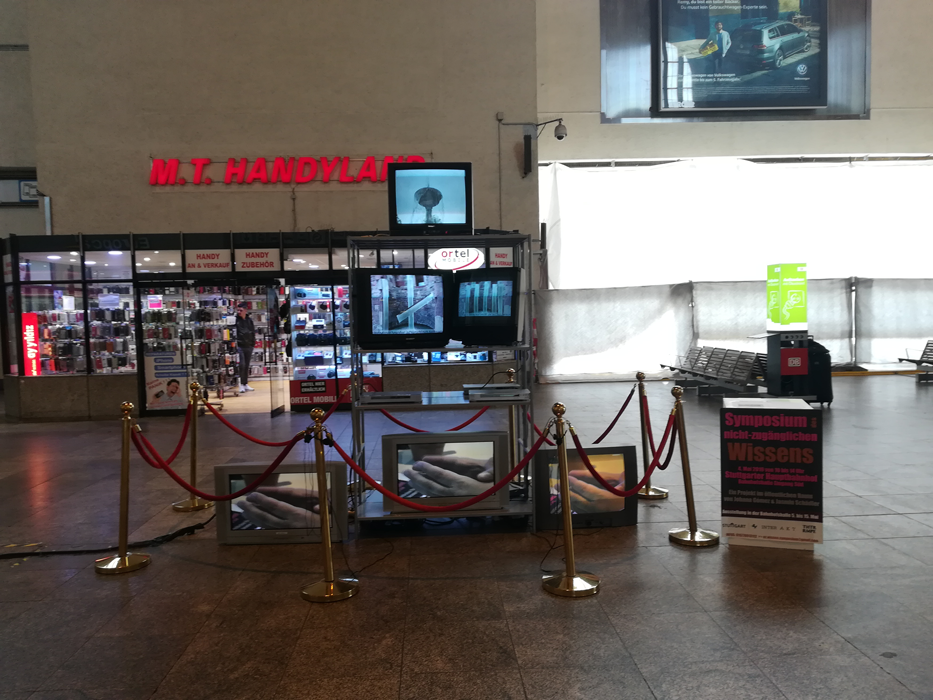 In cooperation with Werkstatthaus Stuttgart. 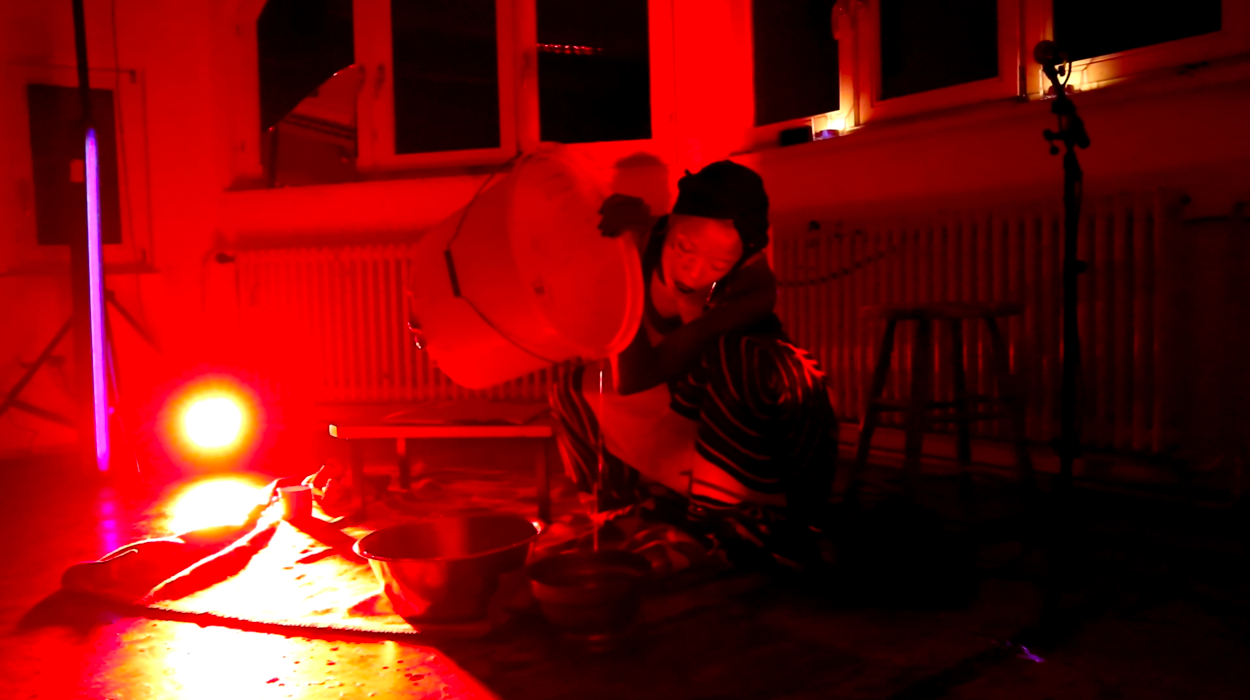 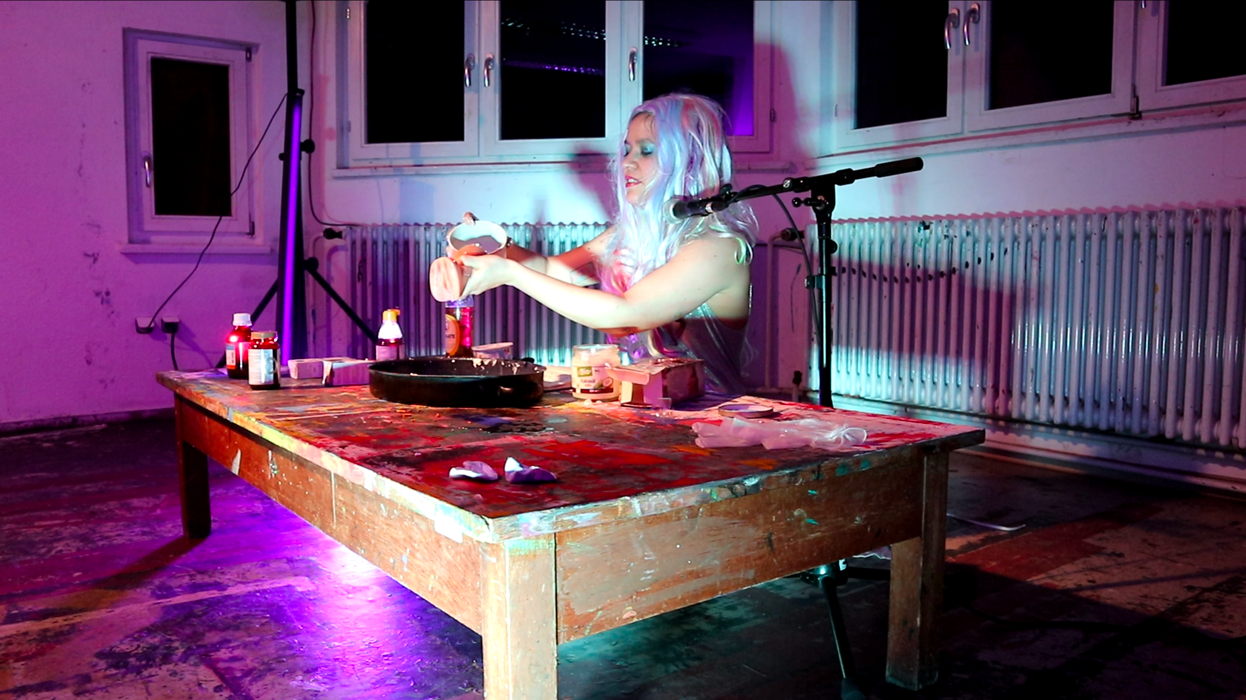 A performative concert for, by and about women who no longer want to remain silent. Violence against women and girls has many faces: psychological, physical, racist, sexual, structural. It happens in the East and the West, in war and in peace, in words and deeds, on the Internet, at home, at work, at school or on the street.
Five artists and three composers from InterAKT initiative address the issue of violence against women and girls. This artistic work shows the path to the big step of all the women who do not want to be silent anymore.
A project by InterAKT Initiative e.V.
In cooperation with Musik der Jahrhunderte.
Funded by the City of Stuttgart and Musikfonds. 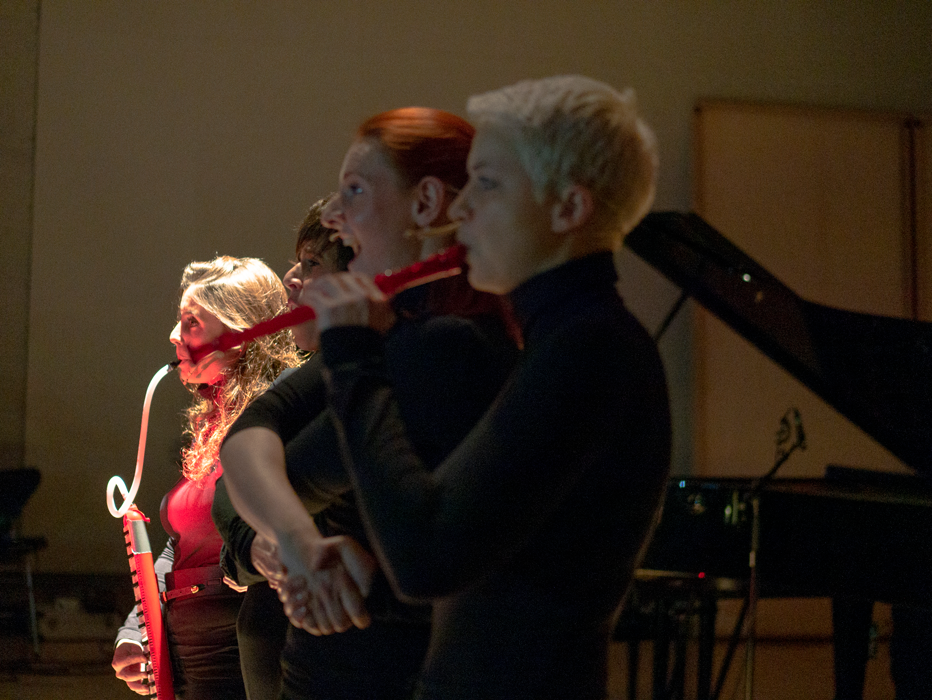 At the opera, we experience great emotion while sitting quietly in a seat in the dark. The excitement is channeled into applause and, now and then, shouts of bravo or boo. Affects are the means of opera - lust, suffering, desire, fear according to Plato. Throughout history, they have repeatedly left the opera house. In the meantime, this role is mainly taken up by the political stage. Politicians are talking about feelings again and provoking and performing affects, while facts are losing importance - because feelings are more trustworthy and less suspected of being fake. Is this the eve of the return of opera as a political tool? In the opera support group we come together and interrogate our expectations and disappointments with anecdotes and opera fragments.
On October 29, 2019 it was shown again at Treffpunkt Rotebühlplatz of VHS Stuttgart.
A project by InterAKT Initiative e.V.
In cooperation with Atelier Theater Stuttgart.
Funded by the City of Stuttgart. Supported by LBBW-Foundation. 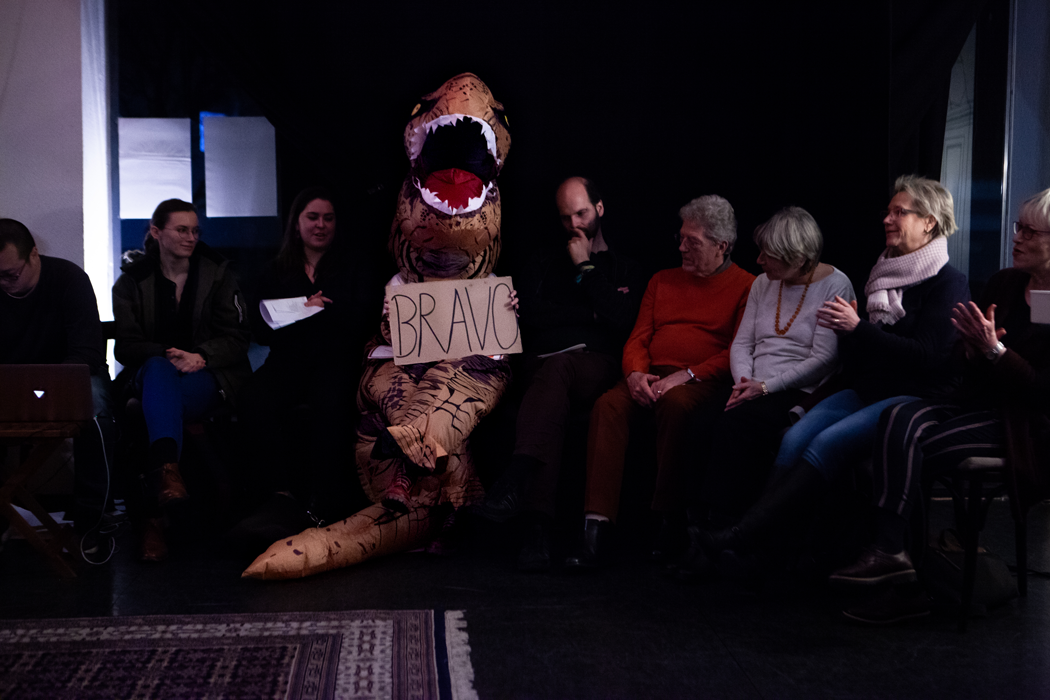